One of my favourite airports is Kailua Kona in Hawai'i. Such a joy to be met by Pricilla with a wonderful lei. I had not seen Pricilla's house and it is amazing. Beautifully laid out and surrounded with native hawaiian plants and forest. She has a small nursery and a shade house. The best outdoor shower I have ever used with hot water from the solar panel. We have done lots of fun things like working in her garden, hiking the property and a longer hike on the Saddle road, snorkelling in Kahalu'u Bay, planting in Kaloko Honakahou and a lovely dinner with Tom and Lon. I feel extremely grateful and lucky to be here. 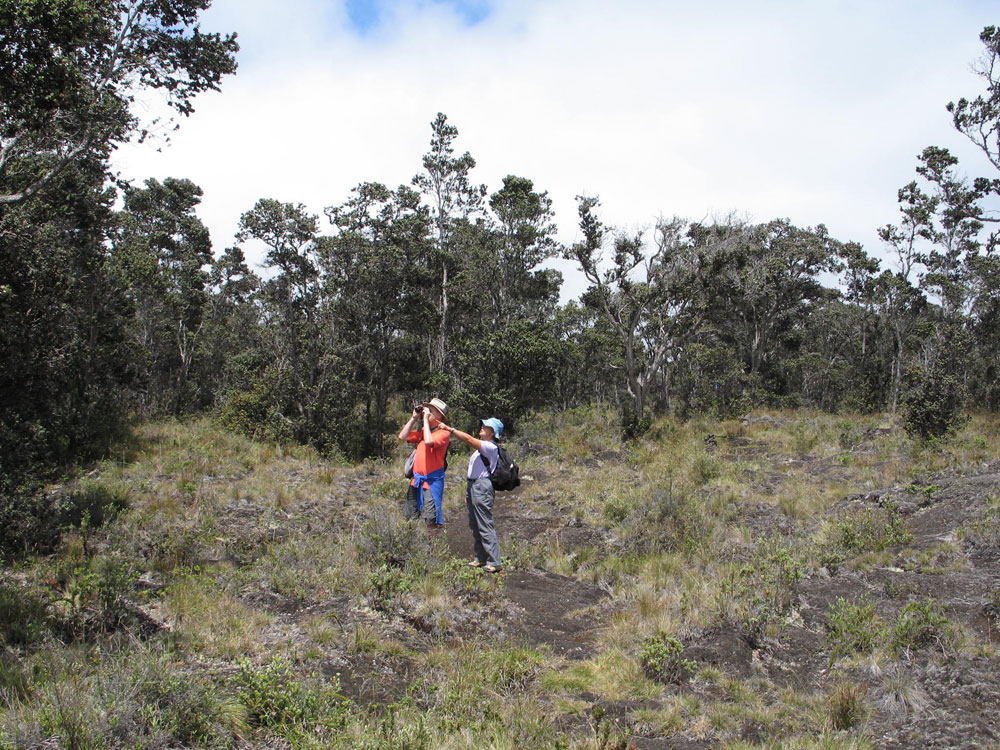 On the Saddle Road, the road that runs in the valley between Mauna Loa and Mauna Kea, is the Pu'u O'o trail. It is an old route that was once used for cattle but nowadays it is an exciting trail for bird-watching.

The trail itself is really interesting as it passes through several distinct geological and ecological areas. The trail derives its name from Pu'u - a hill and O'o - a large honeyeater, which is unfortunately extinct now.

The trail is very varied and passes through several kipuka (islands of old lava with vegetation, which are surrounded by newer lava flows). We also crossed A'a (very rough lava), and later through grassland and open forest over old pahoehoe (smooth, glassy lava).

After we hiked about two hours, we had a lovely picnic and on the way back had stunning views of Mauna Kea, and we were fortunate to observe a couple of native birds called I'iwi.

The trail is on the south side of the road, coming from Kona, at the 22.4 mile point.

You can find more information on the trail and the walk in The Birdwatcher's Guide to Hawai'i. 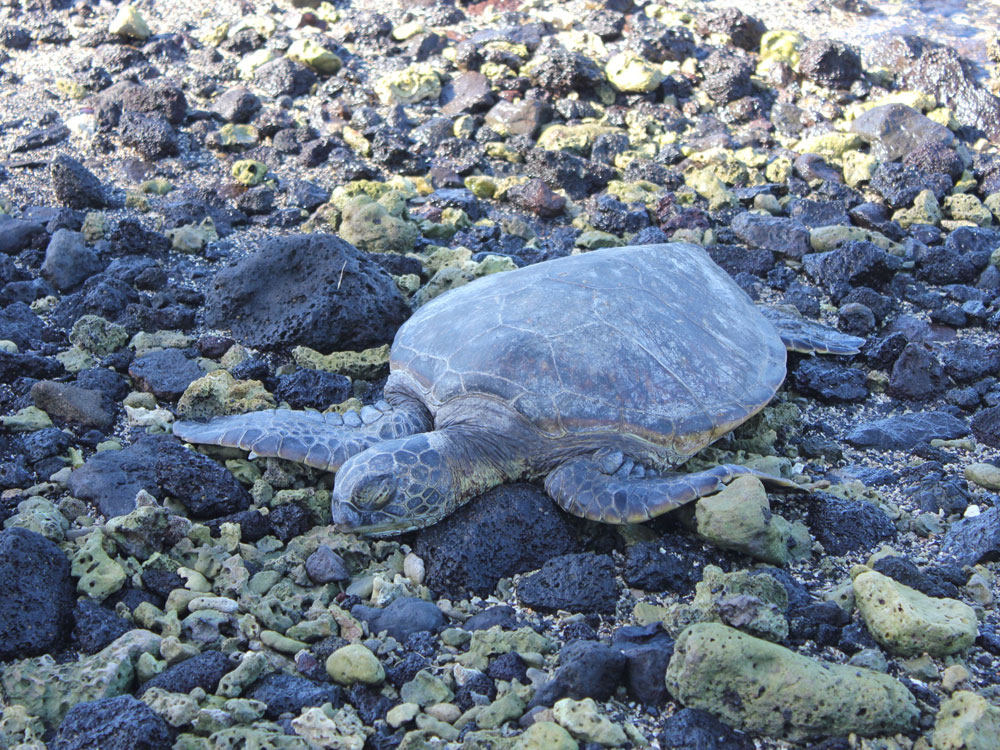 "Hanau ka po'ia honu kua nanaka - from the darkness of time came the sea turtle with its plated back." - A Hawaiian creation chant

Ever since I first saw a sea turtle at Makena landing, a moment I will never forget, I wanted to create a turtle website, but for one or the other reason I never got around to it. So I have decided to create a page with the most exciting photographs I have collected over the years. If I had a choice I would dedicate most of my time to preserving these magnificent animals.

It is exciting that, in recent years in Hawaii, after they became protected by law in 1978, turtles are coming back to the shore to rest. This is a relatively new behaviour and believed to be a result of federal protection. Recently I counted 11 turtles resting on a beach!!

Every time I see a turtle my heart fills with joy and aliveness. They are the most graceful, beautiful, powerful animals.

Apart from the images, I am providing a list of links to books and turtle-related websites. 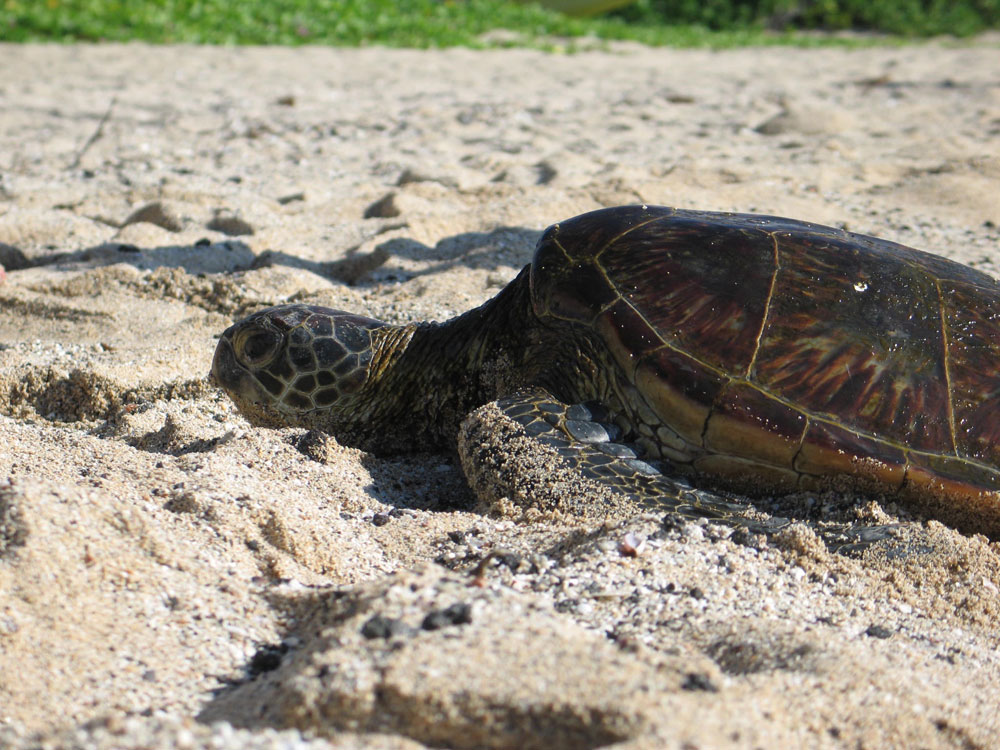 Hiking the Great Crack at Kilauea

Since I was a very young child I have had a recurring dream. I am standing in a barren landscape with some scattered trees. Suddenly there is loud rumbling and the earth starts shaking. Everybody starts running and a huge crack appears underneath our feet. Some people fall in and I have to run very fast to avoid falling in. At the end of the dream I am standing on the edge looking with despair at the huge gap. Until I learned better in school, I thought earthquakes always created cracks and gaps in the ground.

About two years ago I was fascinated to see a National Geographic program on television and I saw a rift in the ground, just like my dream. It was called the Great Crack and it was located in the southwest rift zone of Kilauea volcano on the Big Island of Hawaii.

The Great Crack is one of a series of cracks, eruptive fissures and cones that outline the southwest rift zone of Kilauea. Exactly when the crack formed is unknown, and although it is continuous for a great length all of it may not have been formed at the same time. 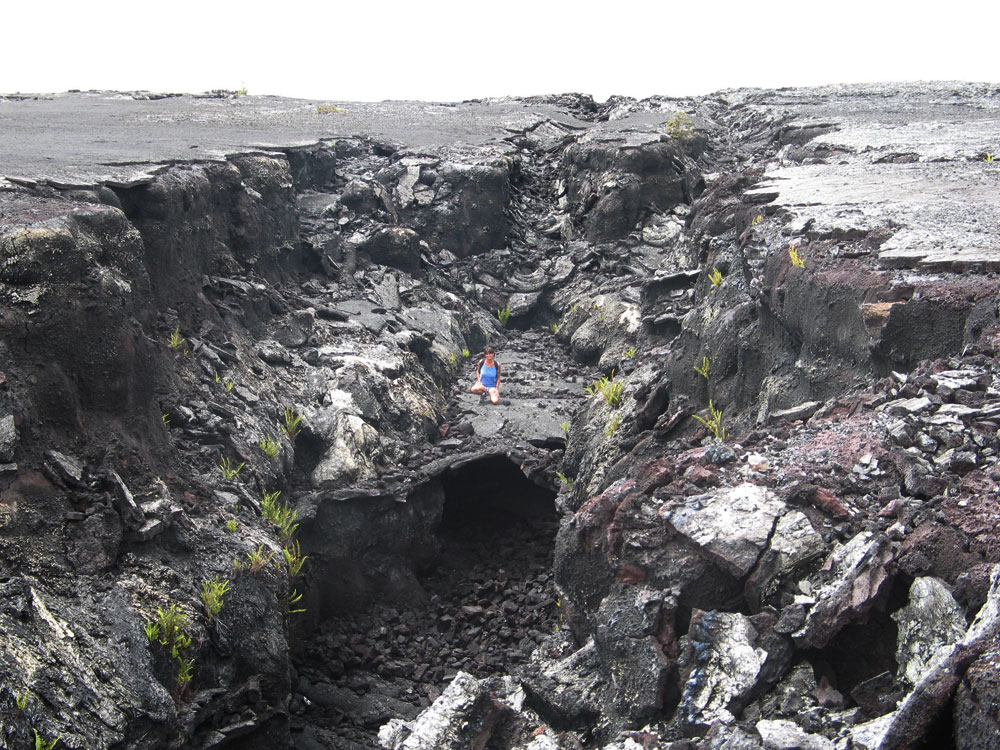 There are two ways to hike the Great Crack: one is Footprints Trail and the other from Crater Rim Drive. Both of these are located within Hawaii Volcanoes National Park.

To reach Footprints Trail, drive from Pahala towards the town of Volcano on Highway 11. The trail is on the right side in the Park and is named for the footprints preserved in the ash of the 1790 eruption. There is a pull-off with an emergency phone. Walk along the trail and you will pass the footprints, which have now been covered over with a roof, and keep heading towards the ocean.

My friend Priscilla and I hiked from Crater Rim Drive, having parked near the sign for the Southwest Rift Zone. We followed the crack until we reached the top of some lava hills then hiked across the barren lava field until the Pu'u O'o trail brought us back to the road.

The crack varied from 20 feet (6 metres) across and 30 feet (9 metres) deep to just a series of small cracks. Much of the wall of the crack is jagged. In some areas it seemed that lava had spilled over the edges of the crack. Much of the edge is unstable so it is not always easy to take pictures - take care and test the ground if you walk there. There were hollow sounds underneath our feet and in some places it was like walking on glass or thin ice, where the lava just crumbled underneath our feet.

The views were awesome and were just like my dreams. I think the pictures speak for themselves. 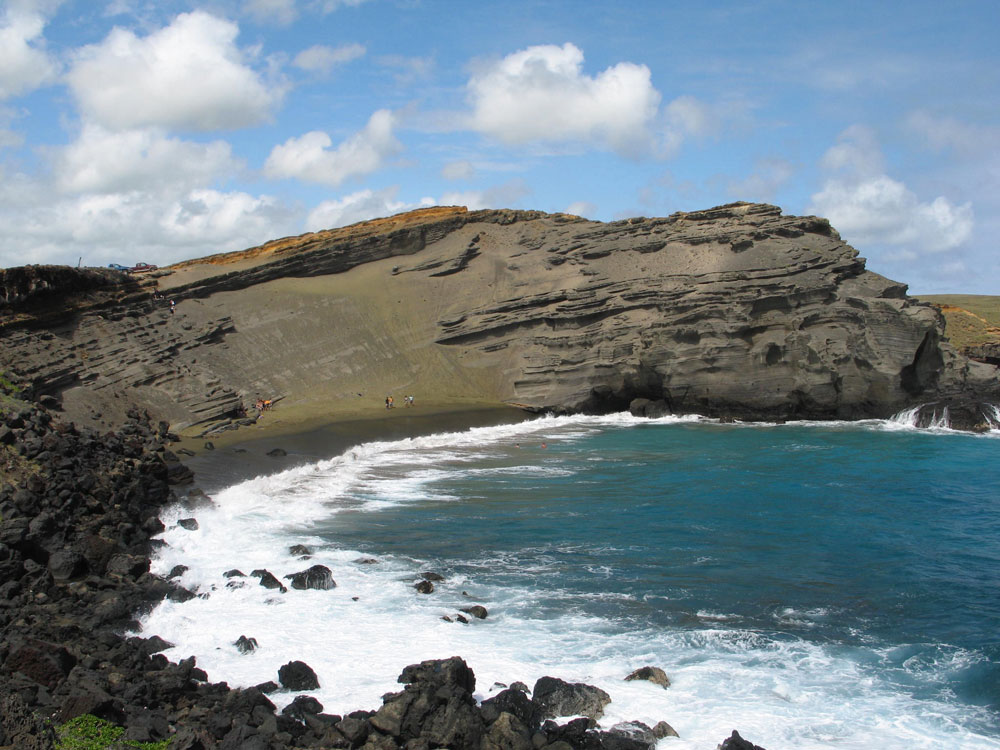