Hilma Hooker - The Transformation of a Drug Smuggler

At 9:08 in the morning of September 12, 1984 a fairly controversial 236-foot Dutch Freighter began taking on water in her lower portholes, and two minutes later, rolled over to her starboard side and capsized off the south coast of Bonaire.

This freighter had a long history of many transformations before it reached its final point of metamorphosis on the fated day of its sinking. According to the Maritime History and Archaeology society of Colombia, the freighter was first constructed in Krimpen aan den IJssel in the Netherlands at the NVC van der Giessen and Zonen’s shipyard. It was named the “MIDSLAND” and was launched by NV Scheepvaart and Steenkolen Maatschappij in Rotterdam in 1951. 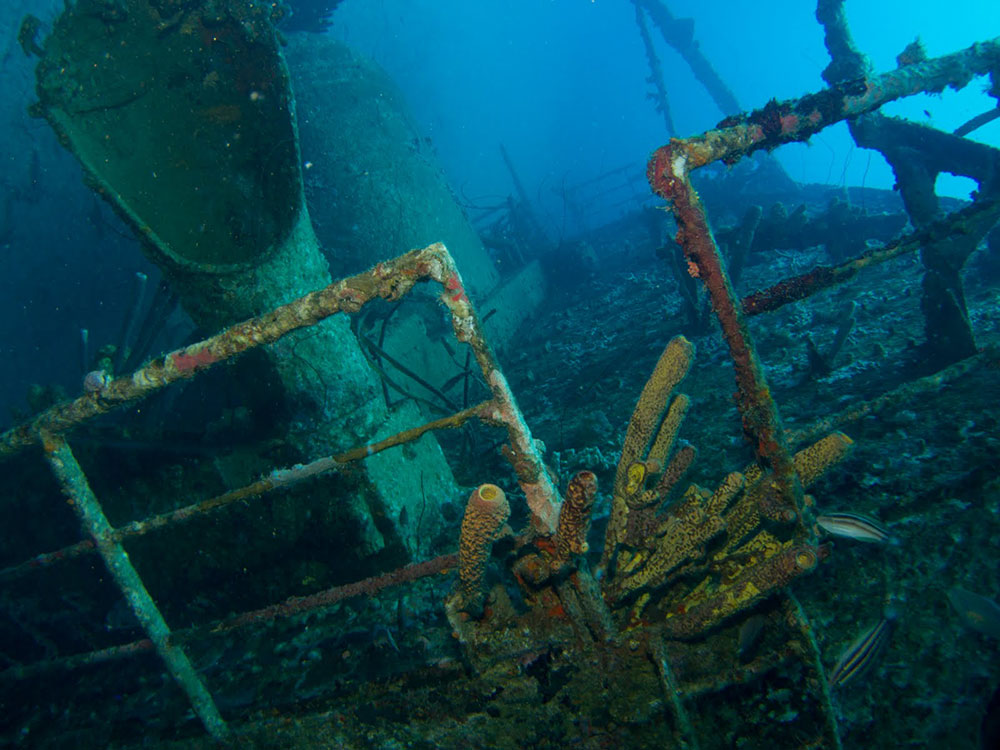 In 1964 it was sold to the Caribbean Association Traders and renamed as the “Mistral”. Three years later it was sold to Bahamas Line and renamed the “William Express”. It then first sank off Santa Barbara de Samana in the Dominican Republic on July 1975! However, was brought back to life, refloated and sold to Benjamin Catrone of Panama where she was renamed “ANNA C”. Then in 1976 sold again to Seacoast Shipping Corp and renamed “DORIC EXPRESS” before finally being sold to San Andres Export and Import Company in Columbia in 1979, where she received her final and most infamous name the “Hilma Hooker”.

In April 1984 the Hilma Hooker emerged off the coast of Bonaire, suffering from mechanical problems, it was towed into Kralendijk’s port. There are many different sources that have different versions of how the investigation came underway. The captain was unable to present papers and some say it prompted the officials to do further investigations which led to a search in Interpol’s records, which in turn flagged it as a drug runner. On some accounts suggested that it may have been an inside tip off. Either way, a thorough search on board turned up empty handed, a dive team was then assembled which was able to discover a strange plate against the hull of the ship, found to be holding 12 tons of Marijuana! This led to arrests of the crew and the ship was then confiscated as evidence in an active legal case. 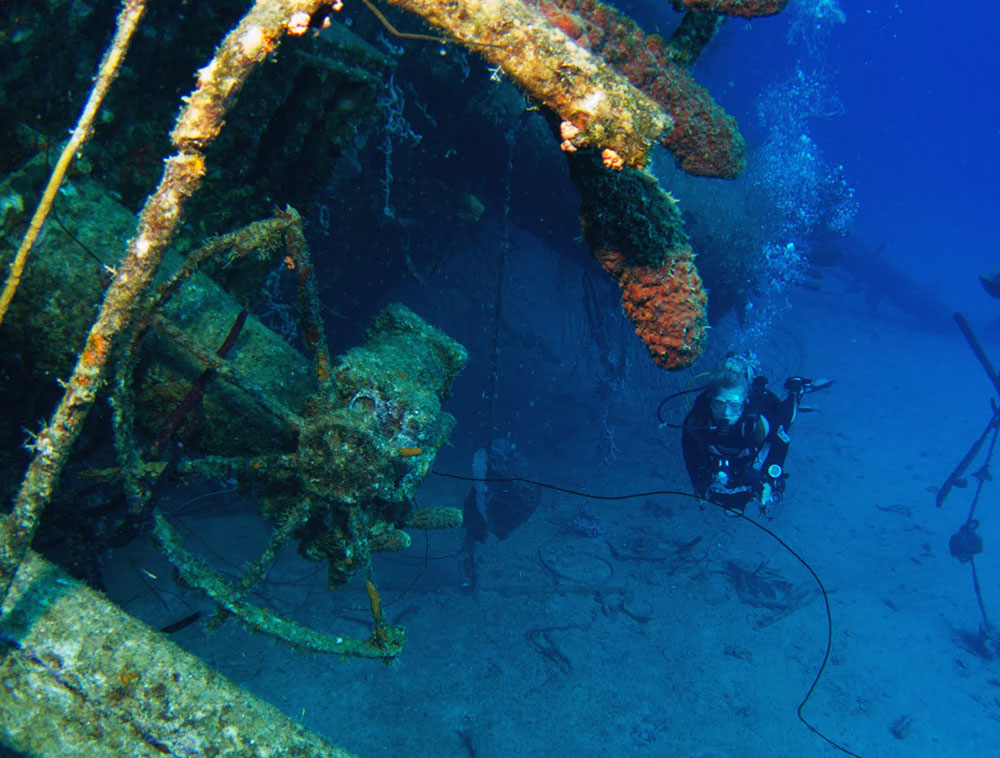 Dive operators were thrilled with the situation as they saw the potential of turning the ship into a new dive site on Bonaire. Unfortunately they ran into some legal red tape, due to the fact that if the owner of the ship were to be proven innocent he/she would need the ship returned to him/her in the same condition it was impounded in. The owner was not coming forward presumably as he/she didn’t want to be forced to pay maintenance costs and potentially face jail time, due to being implicated in a drug smuggling operation. The dive operators then continued to plead with authorities to allow them to sink the ship as a dive site, but due to these legal implications they still did not budge. 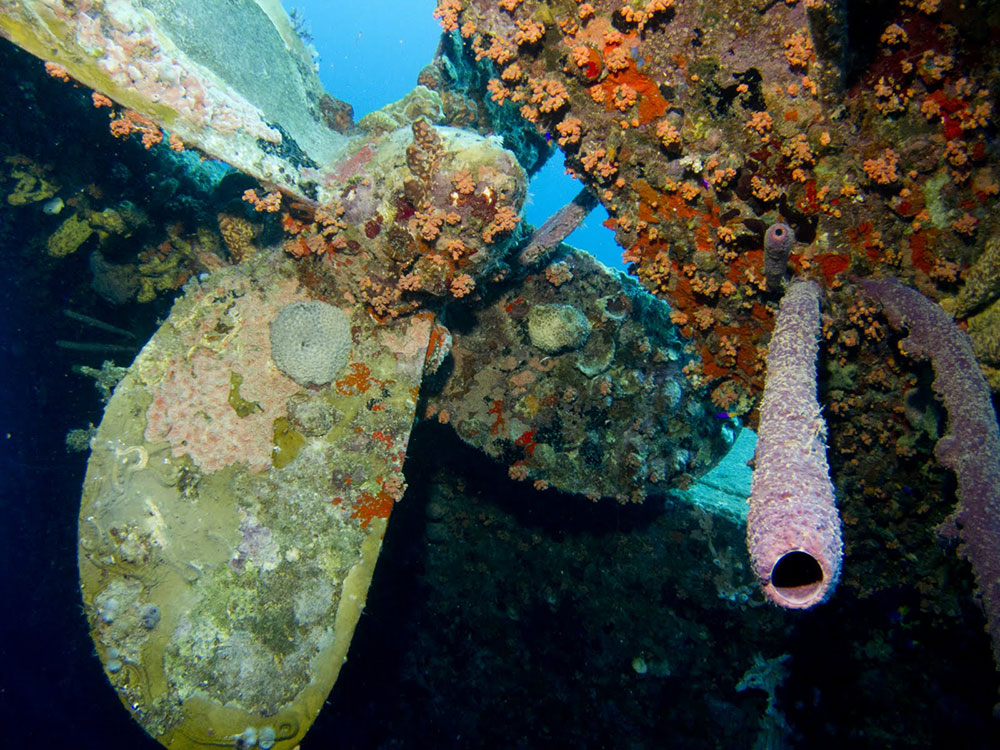 After a period of a couple months the ship was starting to take on water in the port and the costs of keeping it afloat in the harbour were starting to stack up. So the authorities then reconsidered and consulted with the dive operators to suggest where they could anchor it, in the case that it should sink, so it could do the least amount of damage to the reefs and also create a dive site. They then decided to tow it to next a dive site called Angel City. Here it met its final transformation! As predicted, it did indeed sink and the Hilma Hooker transformed from a notorious drug smuggler into one of Bonaire’s most internationally known dive sites.

It now lies next to a double reef system, with the top of the ship resting at 60 feet and the mast at 99 feet. An interesting fact is that it is now a great place to assess the restorative properties of corals, due to the reason that it was an artificial site created in 1984, one can see how long it took for corals to grow on the site, which in turn provides insight into how long they may take to recover from storm damage. 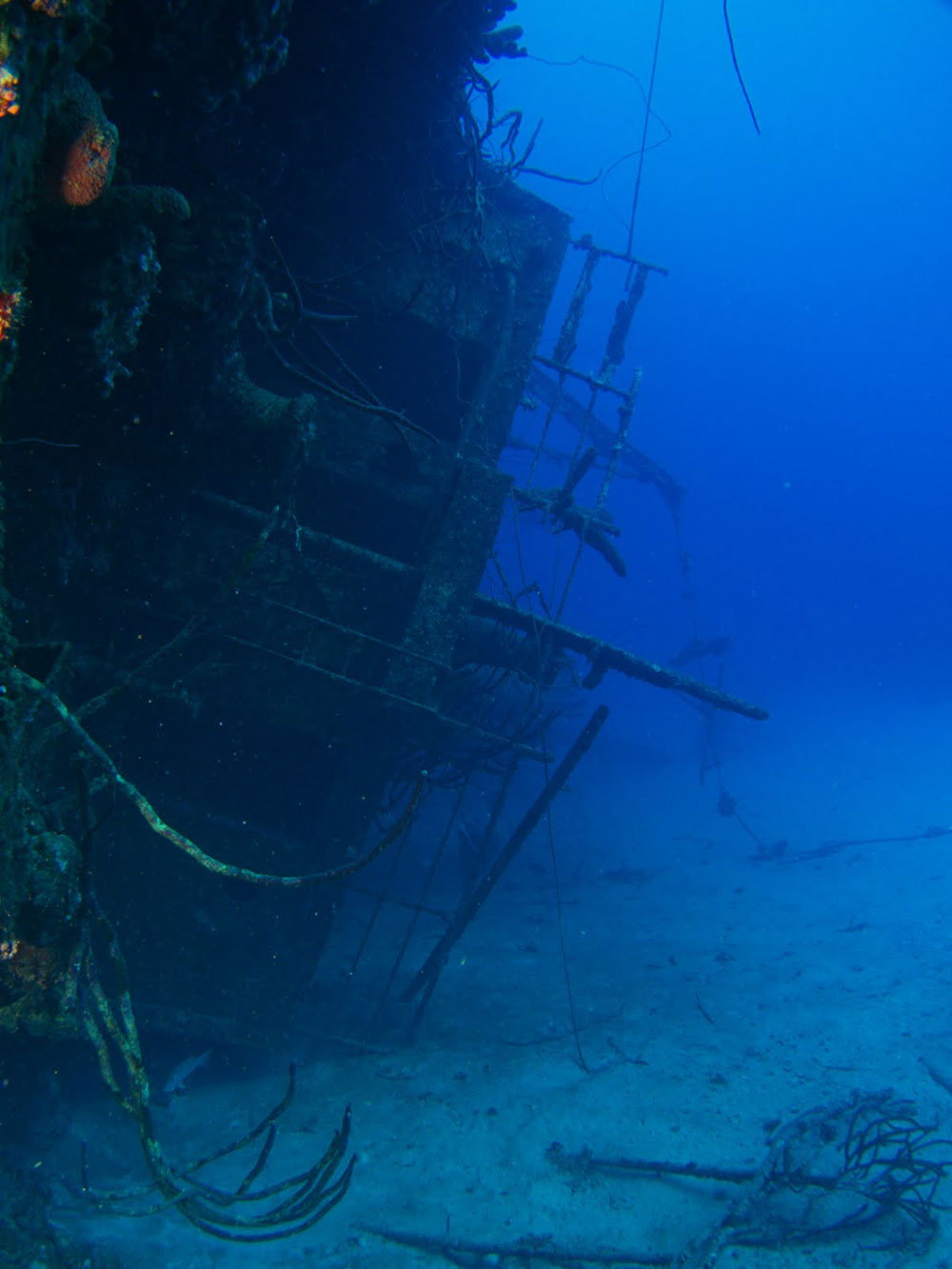 The dive is close to shore, located between Punt Vierant and Salt Pier. If you drive to the site by car the wreck can be accessed from shore but is also often accessed via boat by boat divers. Apart from the wreck itself, there is a large marine eco-system in and around the old vessel, along with a fringe reef next to the wreck which can provide extra visual variety for your dive. 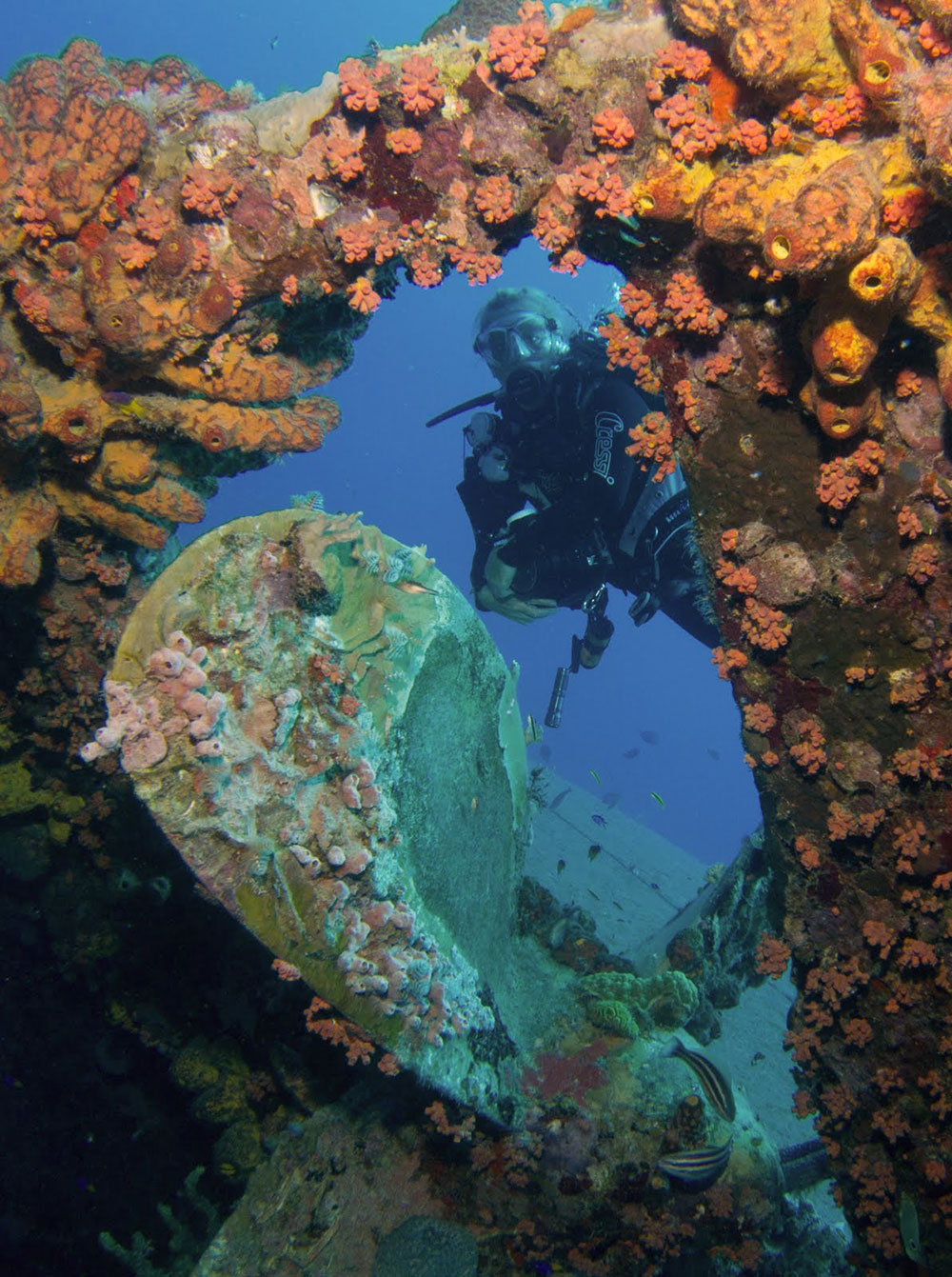 For more accounts and articles on this dive site, you can visit both Caribinn and ScubaDiving for more comprehensive articles. 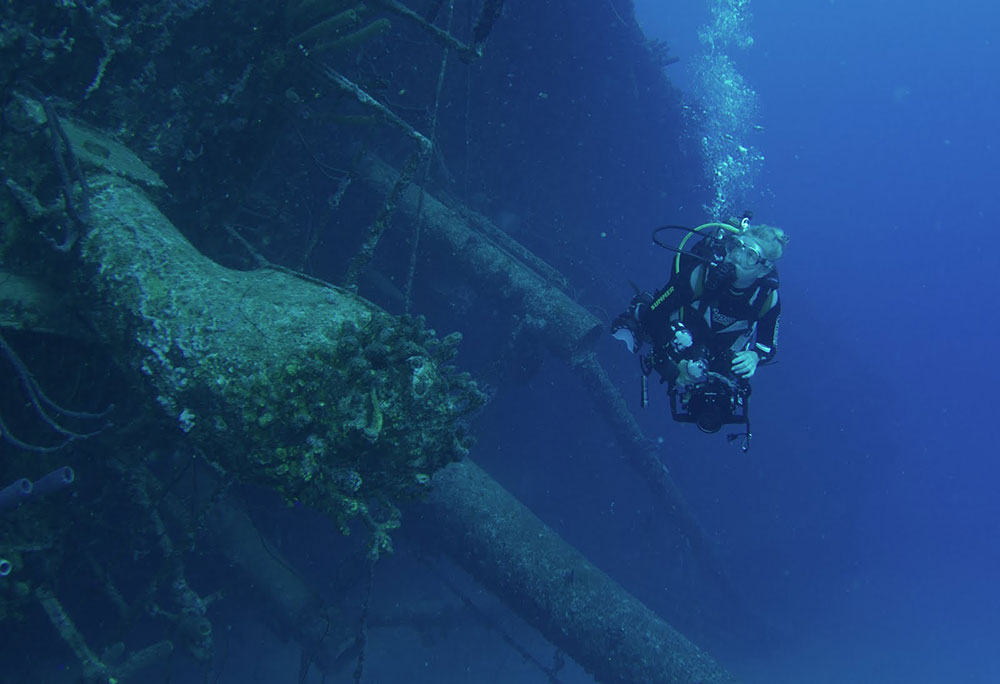