The local food on Bonaire is advertised with a sign saying: Aki ta Bende Kuminda Krioyo, or "local food sold here". Inside there will be a selection of sopi (soups), stoba (stews) and food that is hasa (fried). The main dish will be served with rice, potato or funchi (cooked cornmeal). Many people order it mitar mitar, which is half-and-half, with rice and potato or funchi. Another treat is to ask for the pika siboyo, a sauce made with onions marinated in vinegar and hot peppers. The local food is not made with hot spices, so if you're after some heat, the pika siboyo will give it to you. Overall, the portions tend to be huge, tasty, and make it totally worth navigating the Papiamentu menu. 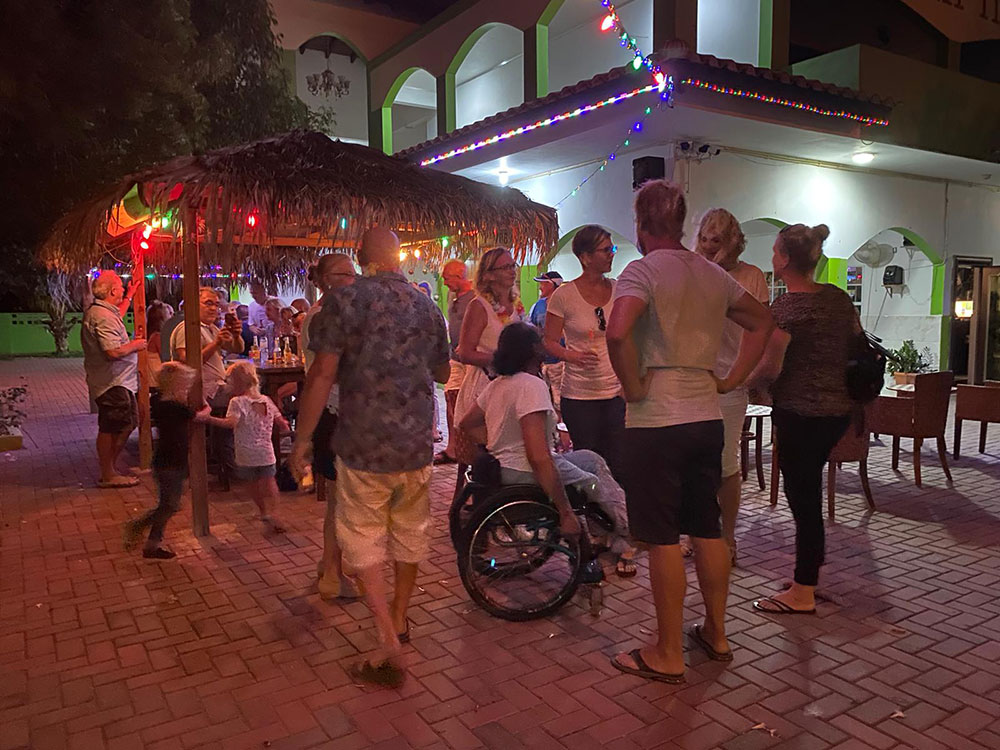 Below is a personal account by Wietze Koopman on his experience and documentation of the local cuisine of Bonaire. We hope that you enjoy it and can get some tips on what to aim for the next time you get a menu of a local food.

Eight years ago I arrived on Bonaire on the last day of April. Years before that, I stopped making advance reservations. Arriving around noon gives you plenty of time to find a decent hotel.

In the rest of the world that is.

The taxi driver gave me a pitiful look when I asked him to bring me to a nice, affordable hotel. Don't you know it's Rincon Day?" he asked.

"Uuh, what's Rincon day", I asked, feeling a bit stupid. "It is the one day in the year when everybody from the nearby islands comes to Bonaire to celebrate" he said. "It is by far the busiest day of the year, and in fact the only day that all accommodations are full. But I will try for you." "And so we went. After 6 full accommodations, my friendly taxi driver gave up and I had to resort to plan B. I was lucky: it took a friend of a friend of a friend 4 hours of looking to help me out. He even gave me his car to go to Rincon and join the celebrations. And this is how I first experienced the local food on Bonaire.

It looked like every Rinconesa had her own food stall in front of her house. The beer stalls were dotted in between. Loud music everywhere. It did not take me long to find out: when there is a party in Bonaire there is always tons of food, plenty of drinks, and loud music to dance to.

I started carefully with a pastechi ku gali'a, a fried pastry with chicken. It was quite good actually, so after one or two beers I got a sopi piska (fish soup) at another food stall. You can't go wrong with fish soup on a Caribbean island, it was delicious. After looking at the parade, the dancing and a couple more beers I was ready for the real stuff. I asked "what is really Bonairean food", and someone told me to order sopi mondongo. In my greed to taste something really new and local I found the only stall where they sold it and ordered one. 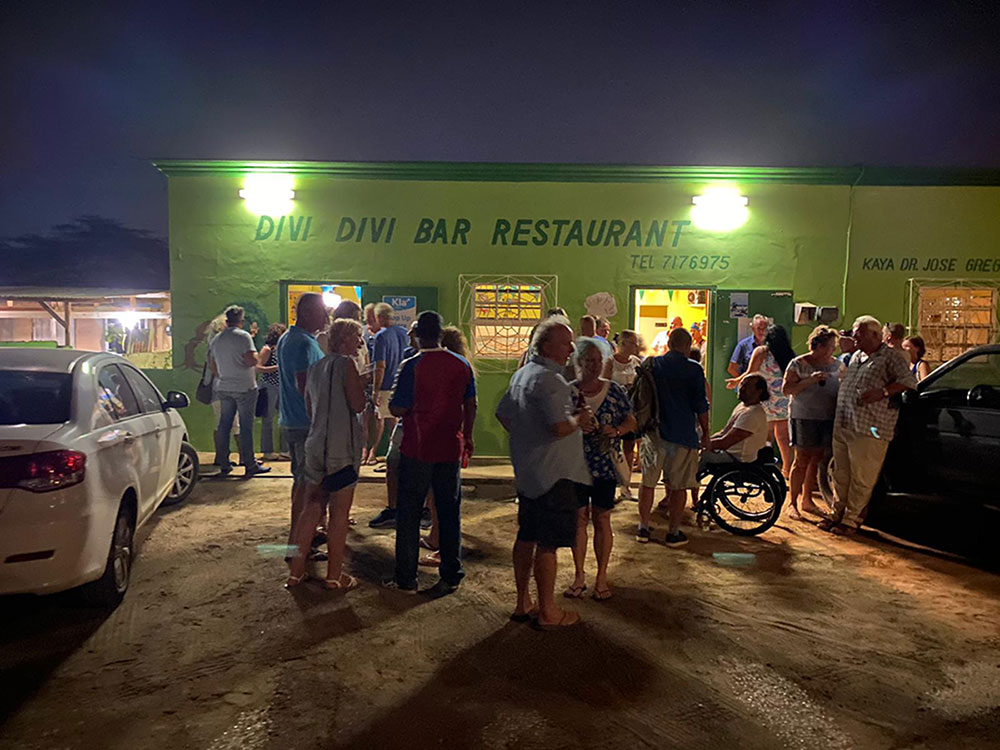 It smelled like shit! But I still wanted to taste it. My god, it tasted like it smelled. YUK! People around me started laughing."Don't you know what's in it? Intestines! The cleaning is very time consuming and not always done properly. I made a firm decision to first ask what is in it next time I try something new.

This first impression never stopped me from trying unknown local food. There are excellent dishes out there.
Sòpi means soup and many meals start with a cup or small bowl of sòpi piská (fish). A serving of sòp'i kabritu is almost a meal in itself since it has many vegetables including corn on the cob! Sòp'i yuana is iguana but you may like it better if we call them tree chickens. Don’t worry that these huge lizards are an endangered species, most of the islands have an ample supply. Guiambo or Yambo is a slimy soup made from okra and seafood. 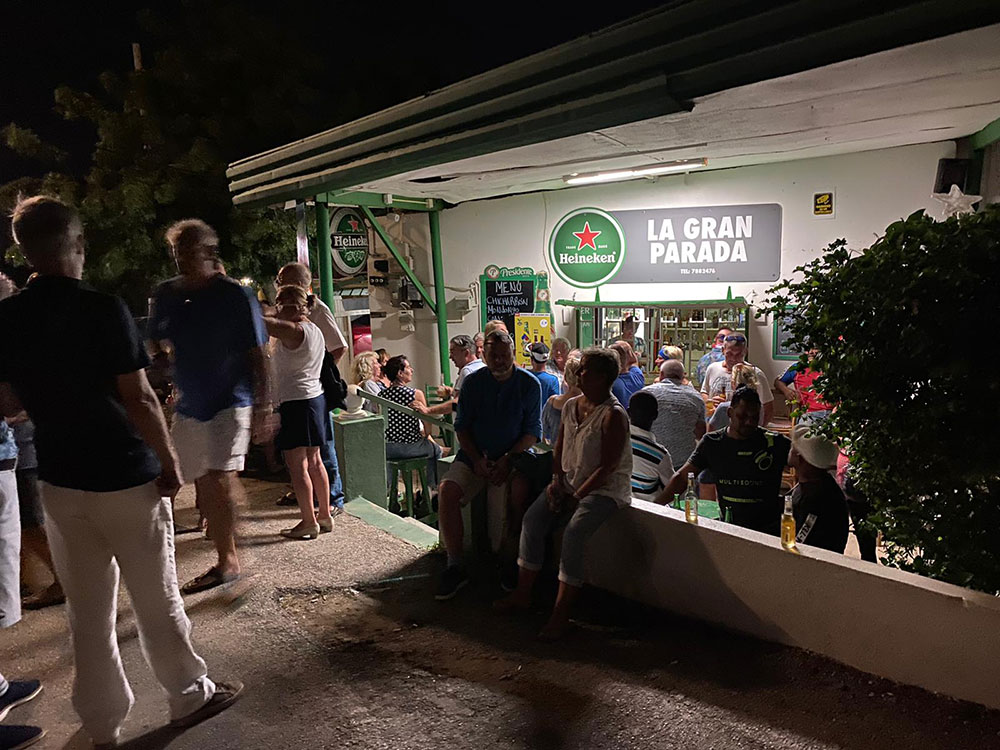 If you are still hungry after the soup you should try the stoba (stews). They usually come with rice or funchi, a cornmeal dish similar to polenta.

Kabritu Stobá is my favorite. This tasty stew is made with goat meat and vegetables in a hearty sauce and is best eaten with funchi, aros blanku (white rice) or moro (rice with black beans.)

Baka Stobá is my second stoba choice. This beef stew, is an international favorite with an Antillian twist. I generally like to eat it with rice or "tutu," which is funchi made with black beans and brown sugar.

Galiña stobá. Chicken stew is very popular since chickens are raised on most of the islands for eggs. When they are past their prime, the stew pot beckons.

Karko Stobá. This dish is prepared with conch and should be familiar to seasoned Island hoppers. White rice and fried plantains are the favored accompaniments. The conch are as good as extinct on Bonaire and catching them is forbidden. On nearby Venezuelan Aves and Rocas Islands there still are quite a few, waiting to be eaten to extinction.

Bakiow Stobá. For many years already, dried salt codfish is imported to the islands. This dish required few ingredients and is quick and easy to prepare. Fried plantain is a tasty accompaniment.

Papaya stoba is made from green papaya, meat such as goat or beef and vegetables. This is a plate for everybody again.

So much for the stews. I got a few other real local delicacies for you!

Kabes ku Higra. It has goat brains and liver mixed together. Perhaps you can ask for a little taste from the snack owner to see if you like it. Remember what I told you about the Mondongo!

If you see the word sanger on the menu, you are talking blood. Generally it is from kabritu (goat). It is served fried and looks a bit like liver. Blood sausage is close in taste, however, I eat neither one on a regular basis.

Keshi yená is a cheese and chicken concoction that is quite tasty and very filling. The original recipe is Dutch and Edam cheese was used.

Bonaire boasts a number of restaurants that serve plates of Indonesian origin. Two that are popular are nasi goreng and bami goreng. The former is a rice dish and the later uses noodles. Both are prepared with a lot of chopped veggies and Indonesian spices. If you combine them with the word "special" you will be served the rice or noodles as well as a selection of grilled meats and sauces.

One word of caution: for those who prefer low calorie, fat free menus, don't eat Antillean food! But if you get your hands on a local cookbook, you can change some of the ingredients and cooking methods to achieve a healthier balance. Regardless of how you cook it, local food tastes great and should not be missed.